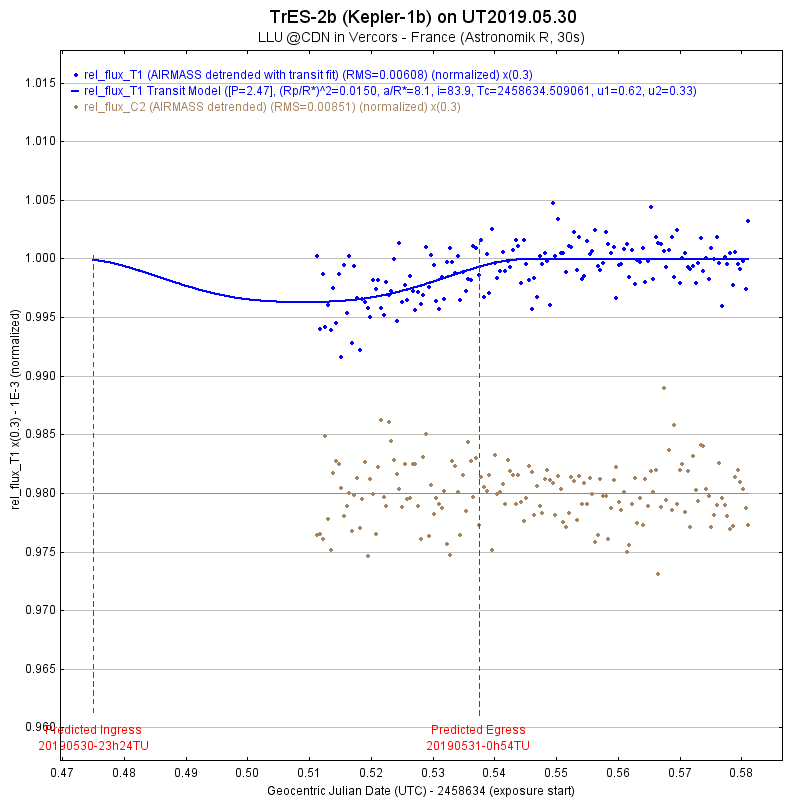 Many amateurs have already done this with success.  And this night, it was my turn for trying to obtain my first “exoplanet transit”. Let’s see below how I proceeded… and what I need to improve…

In a general manner, I tried to follow the recommendations given by Dennis M.Conti in “A Practical Guide to Exoplanet Observing“. Further information about exoplanet observation can be found on his website: https://astrodennis.com/.

At now, more than 3800 exoplanets have been discoverd using various methods. For the transit method, several websites provide predictions for date and location on the planet. I used Exoplanet Transit Database (ETD) website which gives:

BEGIN: Start of the transit (universal time) + altitude in the sky

CENTER: Center of the transit (date + universal time) + altitude in the sky

END: End of the transit (universal time) + altitude in the sky

V: Magnitude of the host star

Elements Coords: RA and DEC of the host start

For this night, here is the list of predictions: 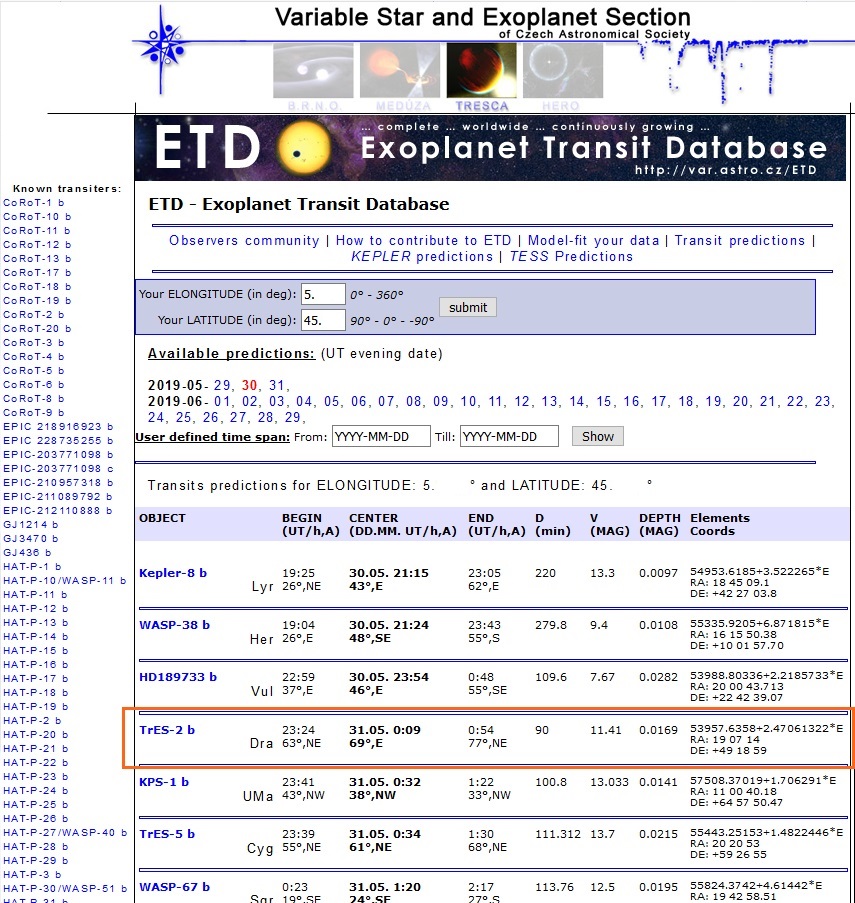 TrES-2 / Kepler-1 is magnitude 11 in a crowded star field in Draco constellation, very close to Cygnus. After a go-to, I used Aladin desktop to locate the star and center it on the image. This last action required a bit of time to be executed as fully done manually. 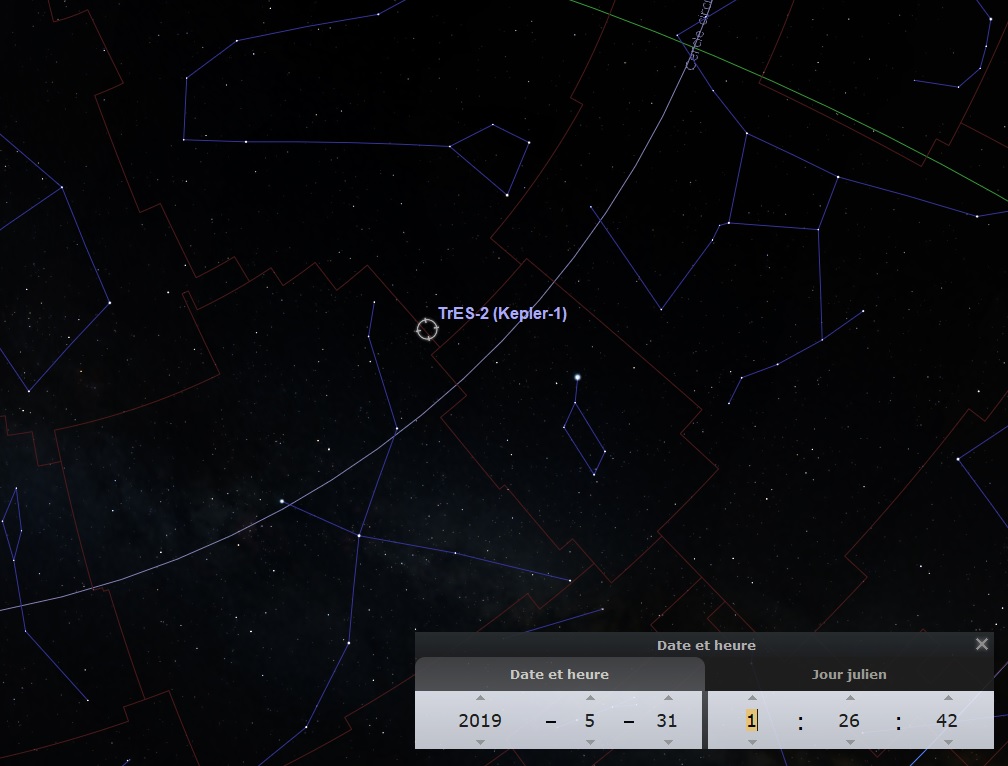 Most critical point is to adjust exposure time to keep the star signal on the linear part of the dynamic of the camera, this during all the acquisition session. TrES-2 is located east of the meridian. So its brigthness will increase and be maximum when reaching meridian. Camera exposure time is therefore voluntarily reduced to obtain a peak for this star of about 40 000 LSB @16bit.

I used AstroImageJ software and followed point to point the recommendations given by Dennis M.Conti in “A Practical Guide to Exoplanet Observing“.

1st part of the process consists of calibrating the acquired images. So each images is corrected with master flat and master dark.

In the 2nd part, a differential photometry is conducted using stars at proximity of TrES-2. Here is below the field of view of TrES-2 and the choosed stars for the comparison. This is a very exciting part as the fluxes of the stars are displayed image after image. So you can observe the transit occuring directly.

Last part consists of plotting propperly the curves on a graph like hereunder. Then it is eventually possible to submit the data to a dedicated exoplanet transit website.

According the plot above, it looks like my data correspond to the transit egress. This is fine, exciting and encouraging for a first attempt! But it is not a real proof of transit!!!

For next attempt, I need:

And I will see what I will obtain…

In all cases I need to thank Dennis M.Conti (https://astrodennis.com) for making this challenge happening thanks to his amazing guide “A Practical Guide to Exoplanet Observing“.  Many thanks to him!

TrES-2b exoplanet was discovered in 2006 by the Trans-Atlanctic Exoplanet Survey (TrES). This survey uses three 4 inch (10cm)  telescopes located in US (Arizona and California) and on Tenerife island. Using transit method, it discovered 5 exoplanets over the 2004-2011 period.

TrES-2b exoplanet is orbiting GSC 03549-02811 star also referenced as TrES-2 and Kepler-1. This star, similar to our sun, is located approximately 700 light-years away from us in Draco constellation. Its magnitude is 11.4 and its age is about 5 billion years.

TrES-2b exoplanet has the following characteristics:

TrES-2 star was also imaged by Kepler spacecraft during 1st calibration shoots in 2009. TrES-2b was the 1st exoplanet transit observed by this mission, hence the Kepler-1b reference.