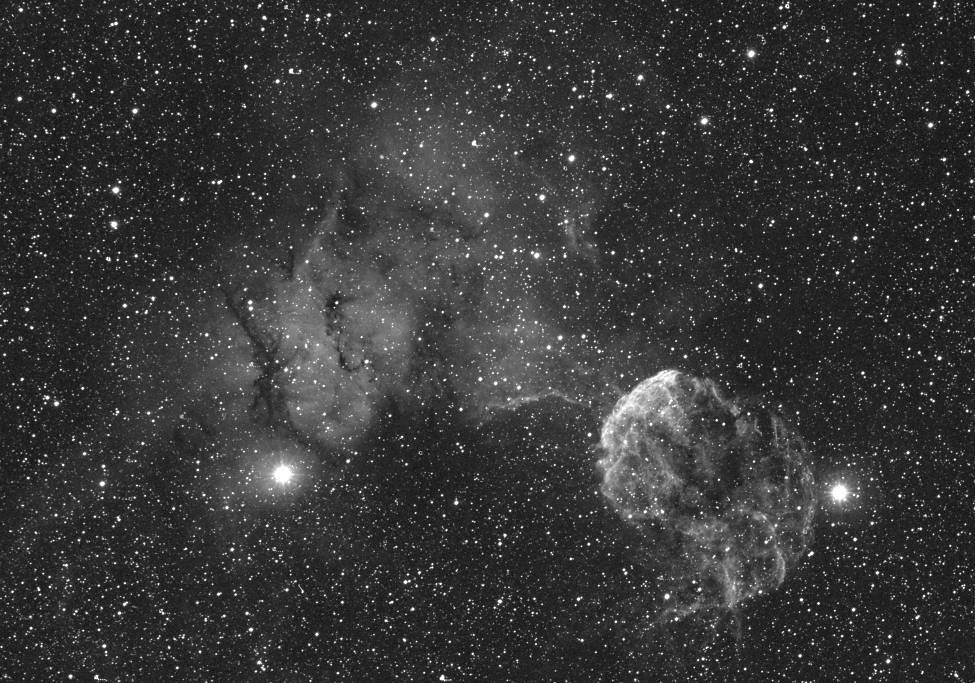 This image has mainly been acquired for future HOO/SHO mix. But the region is also located on the ecliptic plan giving some interest for looking at possible solar system objects. Let’s see if the Ha filter may have some influence on the detectivity of possible asteroids…

The field of view of this image lies west of Gemini constellation at proximity of the northern part of Orion. This is an interesting place in the Milky Way containing several bright deep sky objects. 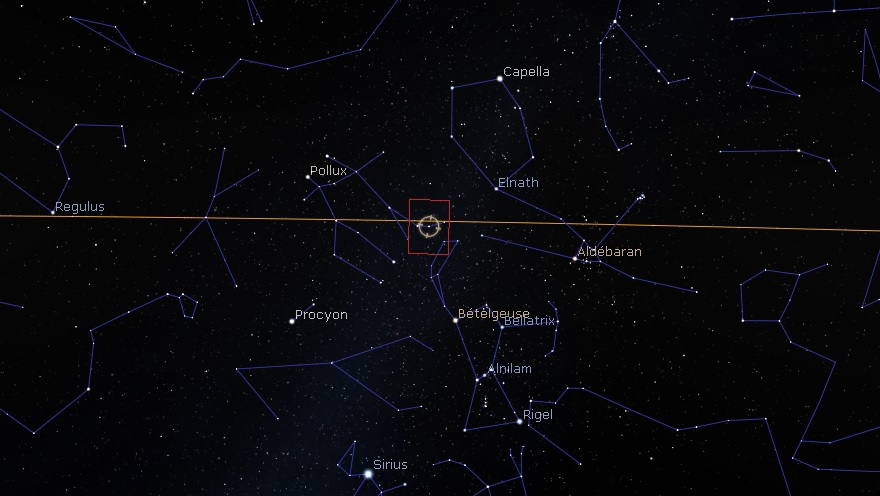 Main deep sky objects are quickly mentioned below. A longer description will come on a future HOO or SHO post.

On the east of IC443 lies SH2-249, a large HII region partially hidden by several dark nebulas. SH2-249 contains also reflection nebula identifed as IC444 which is of course not visible on this Ha image.

More on the south west is located Sh2-252 named the Monkey Head nebula. This bright HII region is at about 6500ly from earth.

Annotation of these objects figure on the image below. 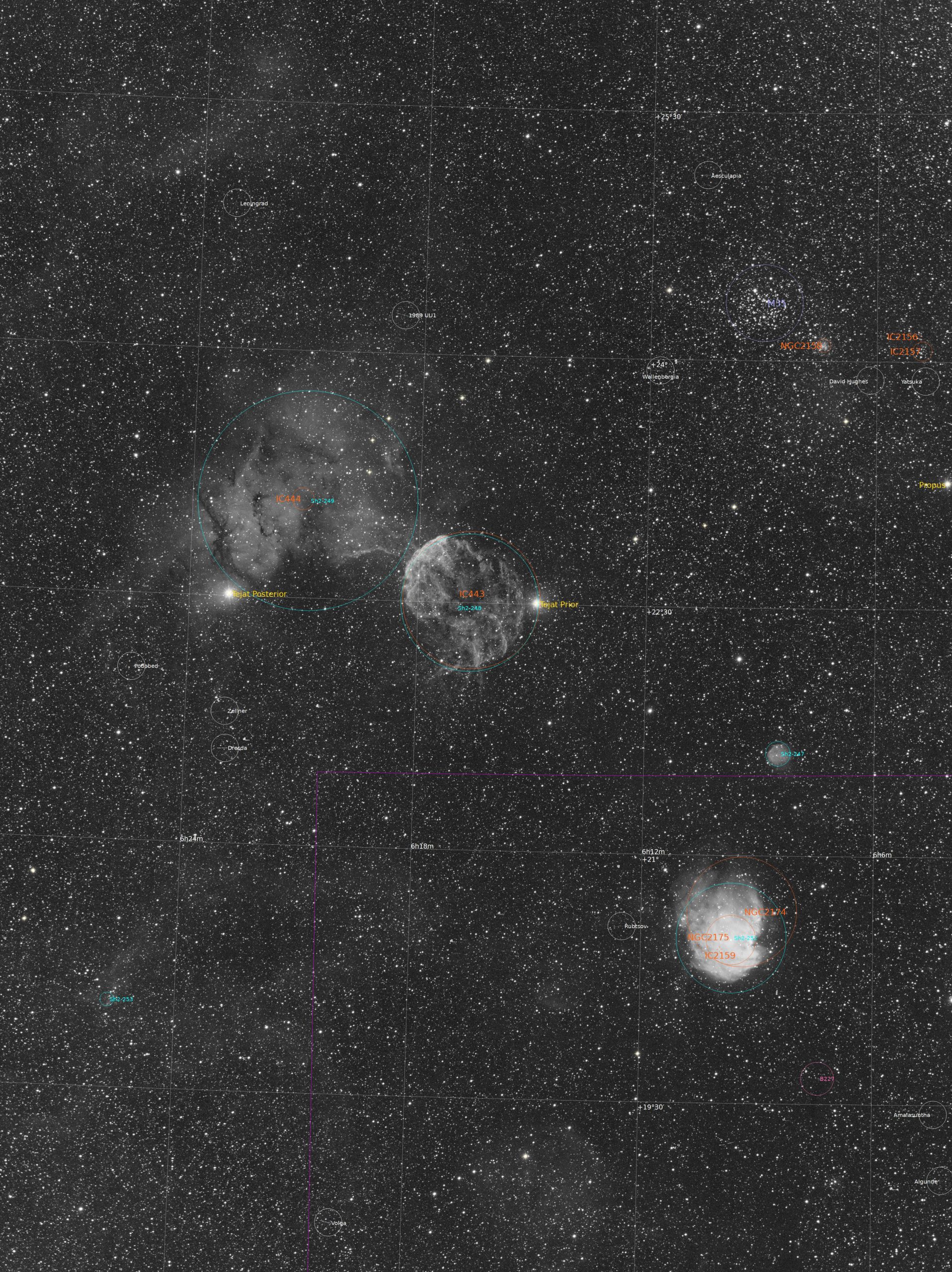 The area of this image is also on the solar system plan, so crossed by moon and planets, but also by smaller objects: the asteroids.

Asteroids detection is revealed using preprocessing with image integration in maximum mode. This mode preserves all the transient details of each images of the stack and thus the movement of asteroids. Their detectection is helped in case of meridian flip: trajectories are brifly interupted!

Here is below image crops showing the trajectory of several asteroids. Crops are ordered clockwise starting top left of the full image. Annotation is executed under Pixinsight by loading data extracted from Aladin/Skybot. 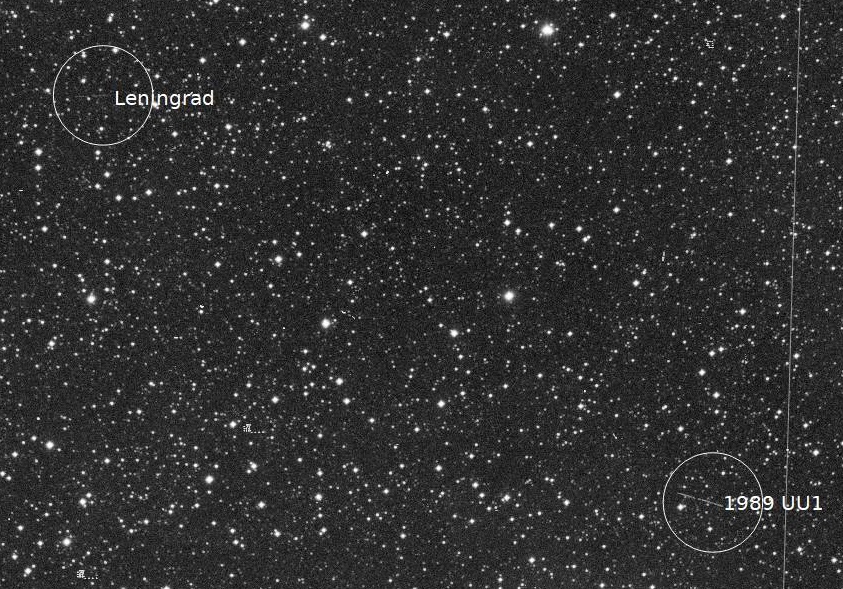 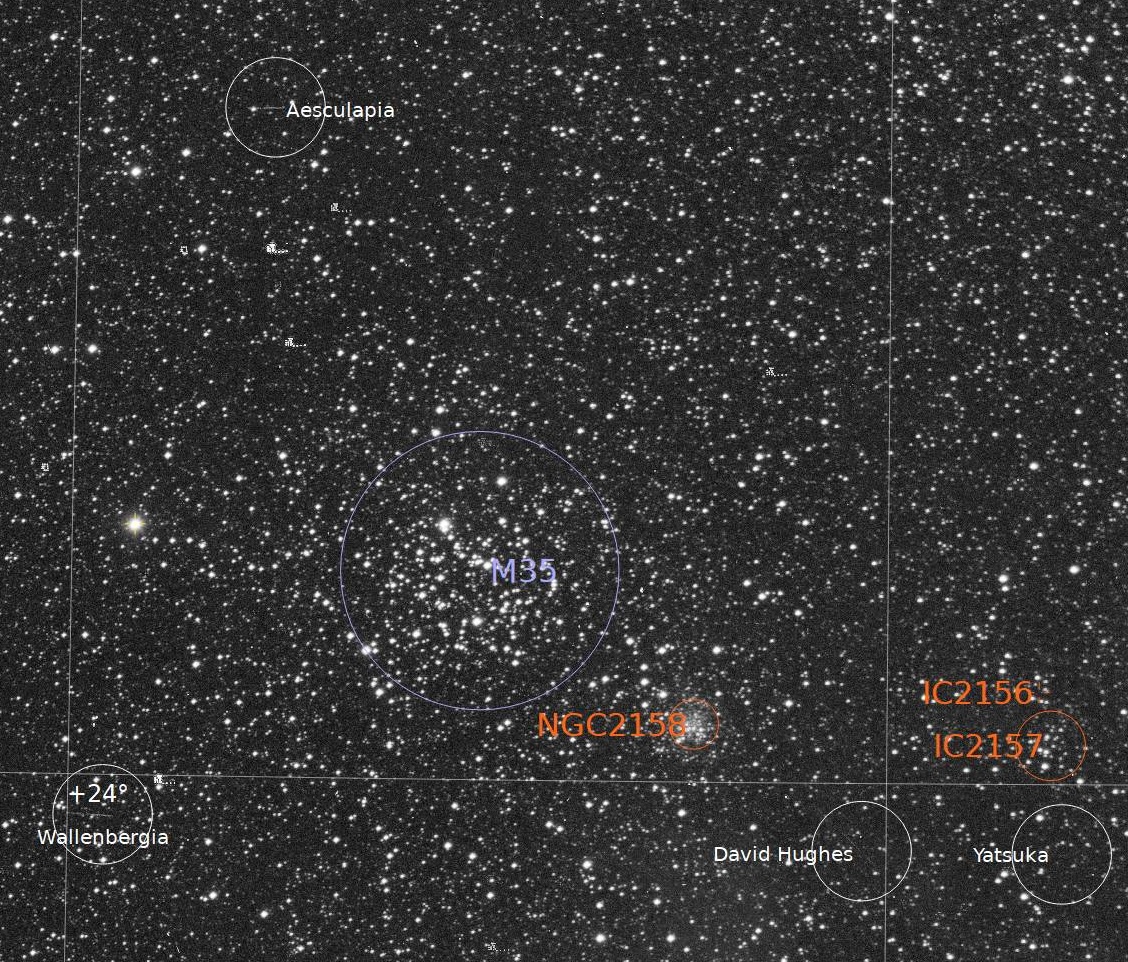 Yatsuka is surprisingly not detected above whereas its magnitude is similar to others asteroids visible on this image. Concern with asteroid database? or simply related to the usage of Ha filter? 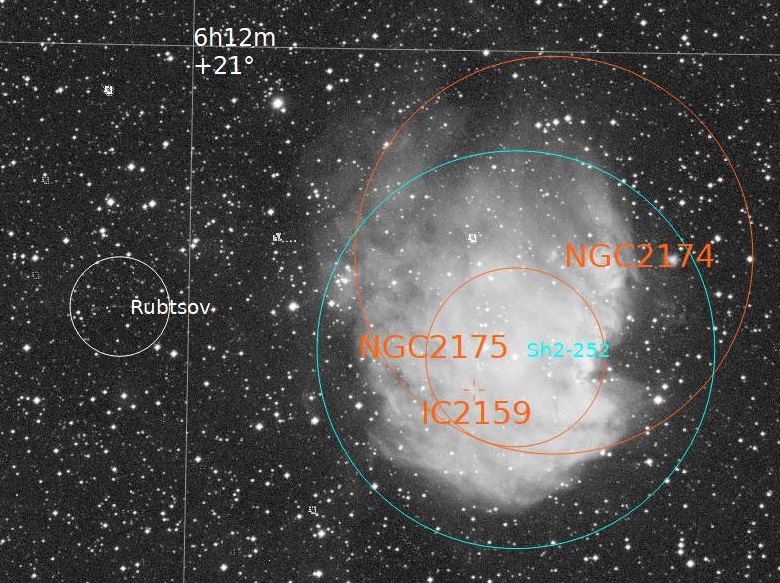 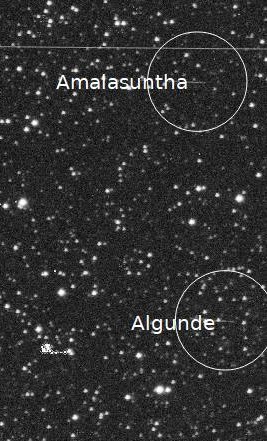 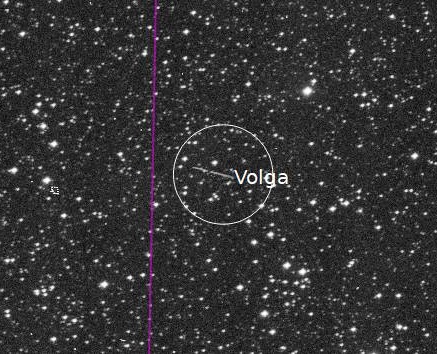 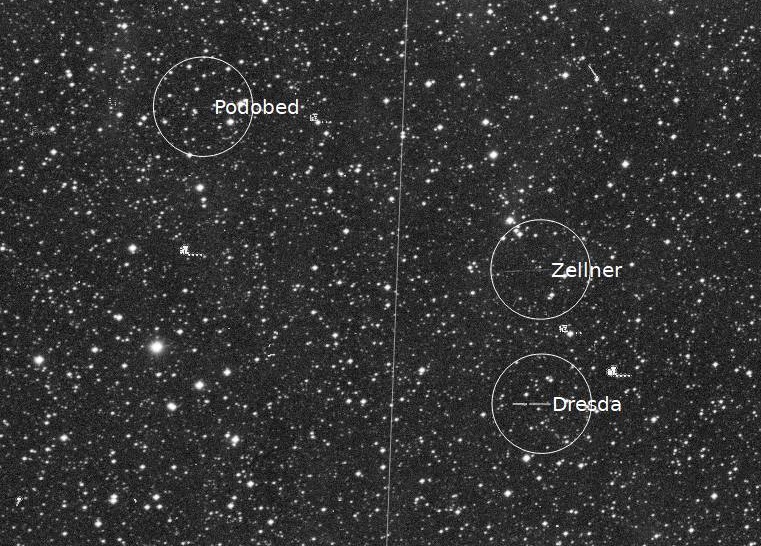 Here is below a video showing the Dresda asteroid movement over the period of acquisition. Zellner is also slighly visible on this video. Others moving “objects” are camera artifacts combined with dithering effect.

For curiosity, here is a summary of every asteroids identified on this image.

V: Apparent magnitude at the date of shooting (28th of February 2019)

Classification: Group or family of asteroids 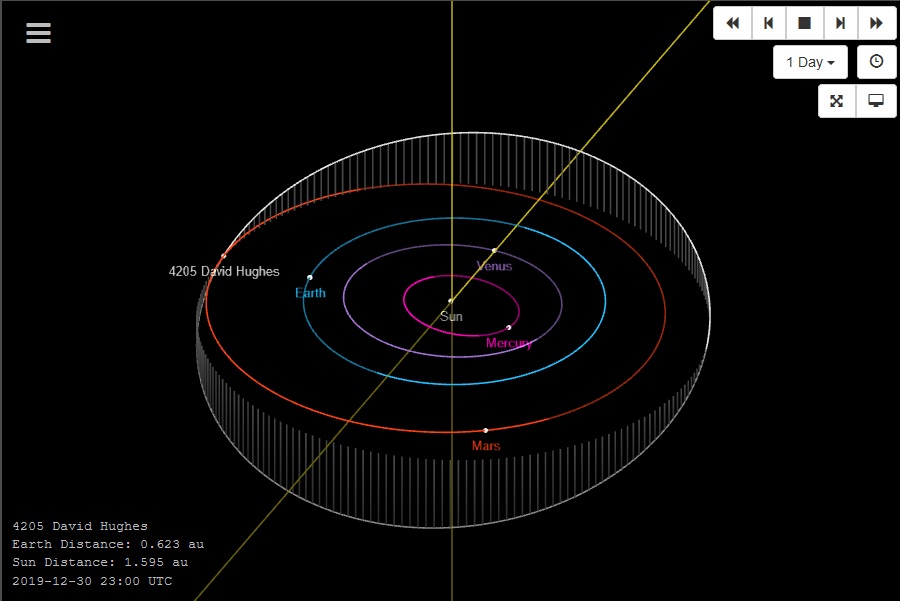 Among the above asteroids, David Hughes stands out from the crowd. This is a Mars Crosser meaning its orbit crosses the planet orbit. Per chance, this occured only few days before the image capture date! But Mars was far away at this time…

This image is acquired on an area of the ecliptic plan with possibly some solar system objects like asteroids. Despite the destination of the image (HOO/SHO mix) and the usage of Ha filter, it has been possible to detect more than ten of them!

According to this post and a previous one about asteroids in Virgo cluster, I will keep in mind the following detectivities for my Samyang 135mm setup (at F/2.8):